When I was a kid I remember watching my grandma milk her goats after a long day of preparing food, gardening, cleaning, canning and washing our clothes by hand in the river that crossed our village. And yes, she washed those clothes with a soap that didn’t smell like roses and she had made herself out of, I believe, lard. Today, I’m gonna share a cashew milk recipe and show you how to milk cashews in your apartment using what I’d probably describe during the late 80’s as a robot. Scientists call this evolution. You’ll also need a sift, a nut milk bag, cheesecloth or if you’re as inventive as me – a piece of a muslin nappy. 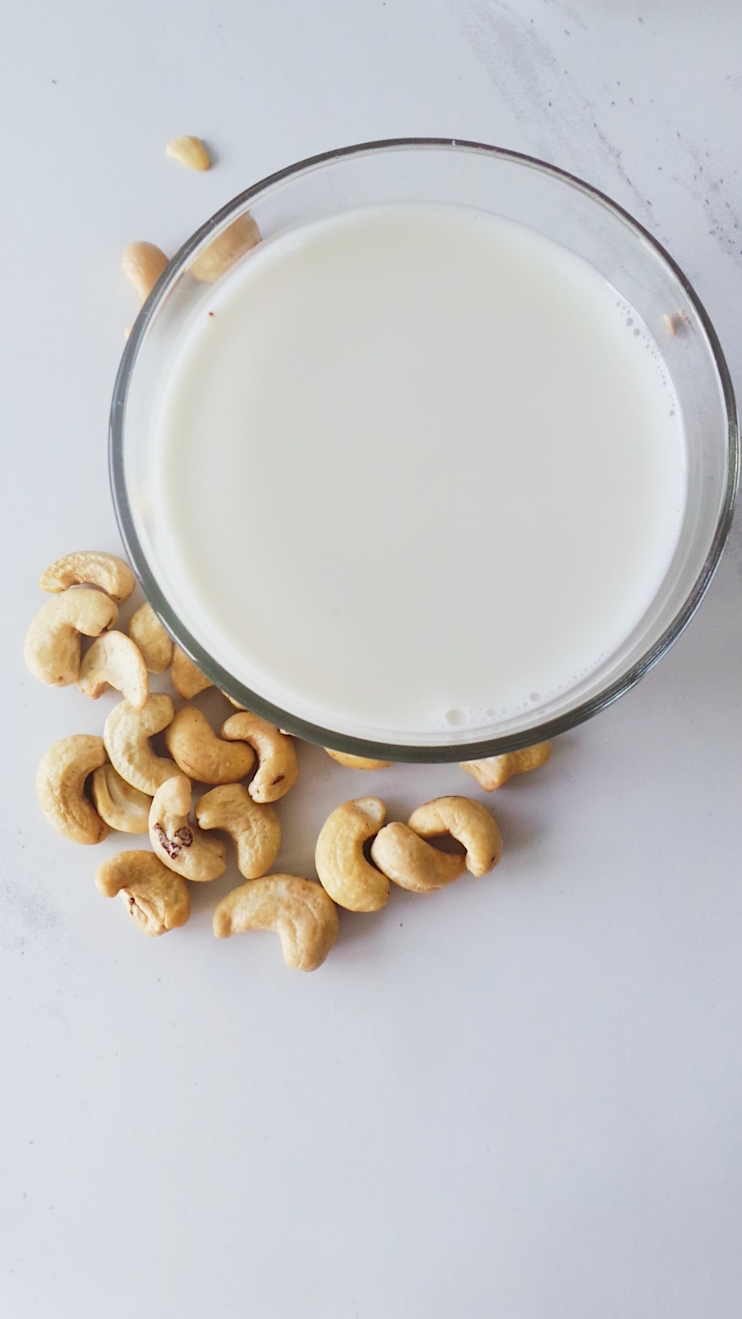 I bought that nappy a few years ago in Germany and never used it for its real purpose. Instead, I cut it in pieces using scissors and not a rusty knife, and made many almond, oat and now cashew milks with it. My grandma, who unfortunately passed away many years ago, may she rest in peace, would be really proud of me.

How To Make Cashew Milk 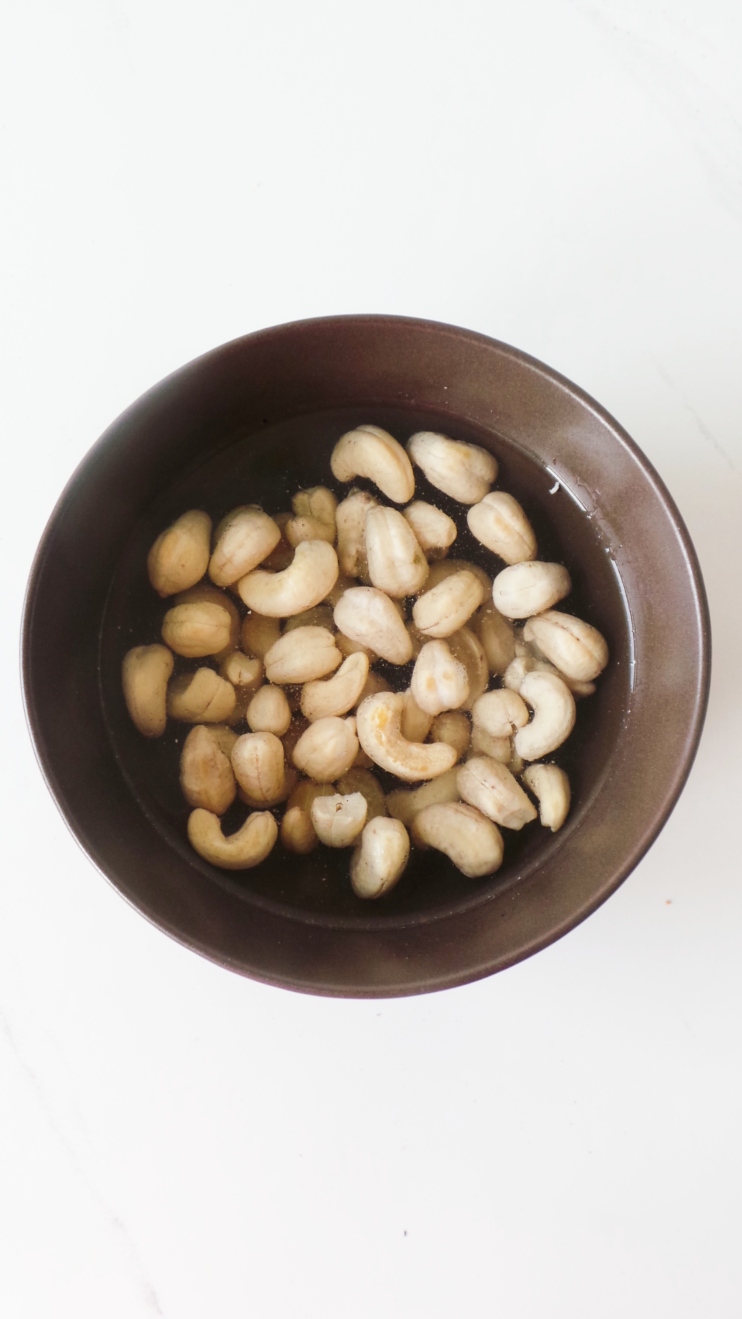 The first thing you want to do is soak your cashews overnight, or, if you’re Speedy Gonzalez, for 2-3 hours.

Although, I’m not gonna lie to you, I only soaked mine for 1 hour and am still alive after drinking the cashew milk, making 2-3 chia puddings with it and eating the cashew pulp without using utensils or my hands. 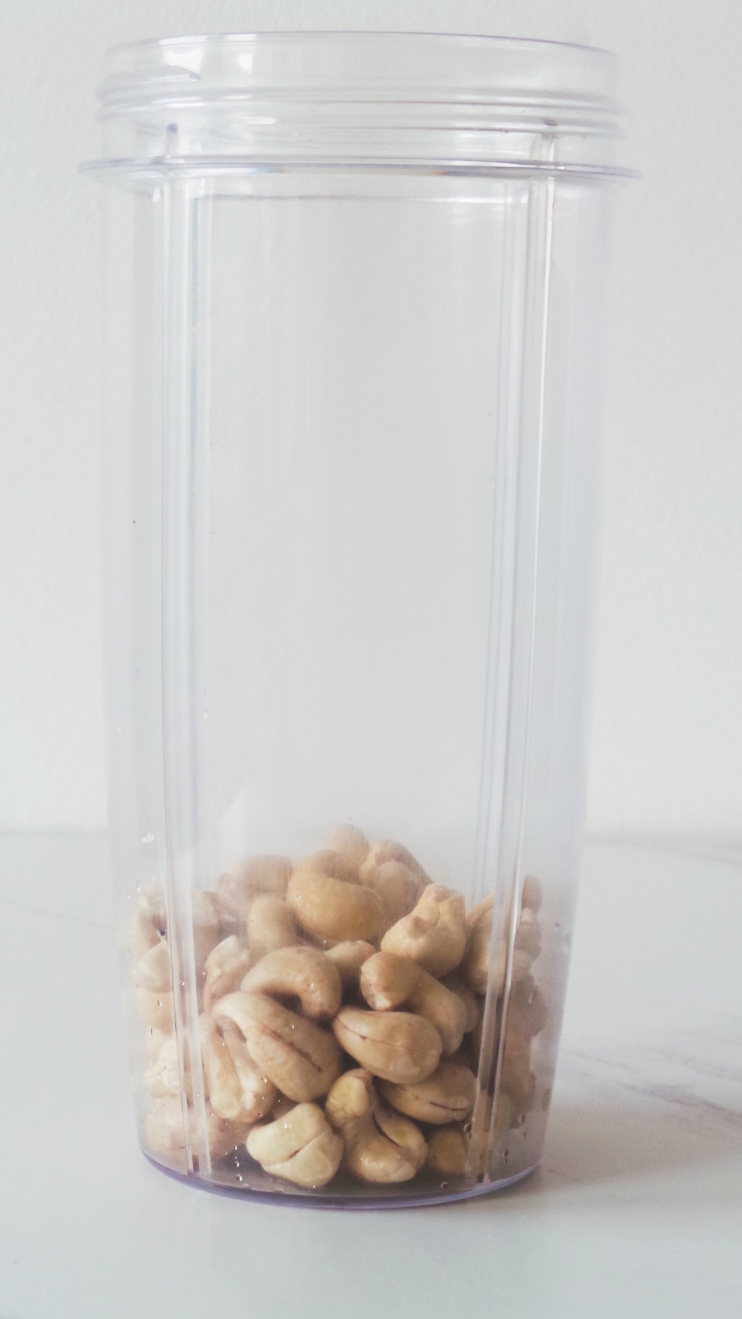 Now that you have those soaked cashews, you want to pour out the soaking water and give them a quick shower as if they’re in France.

Then add those clean soaked cashews to your robot, ahem, blender, pour in some filtered water and blend for a minute. 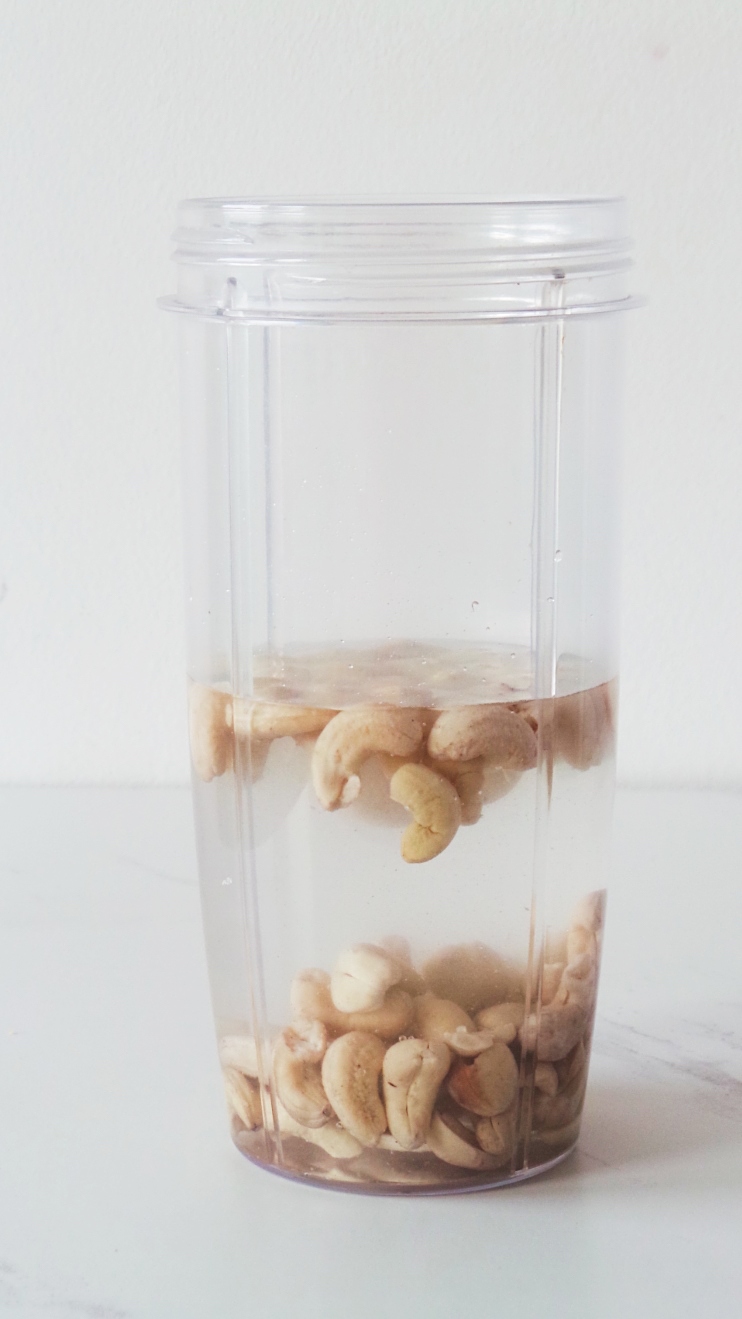 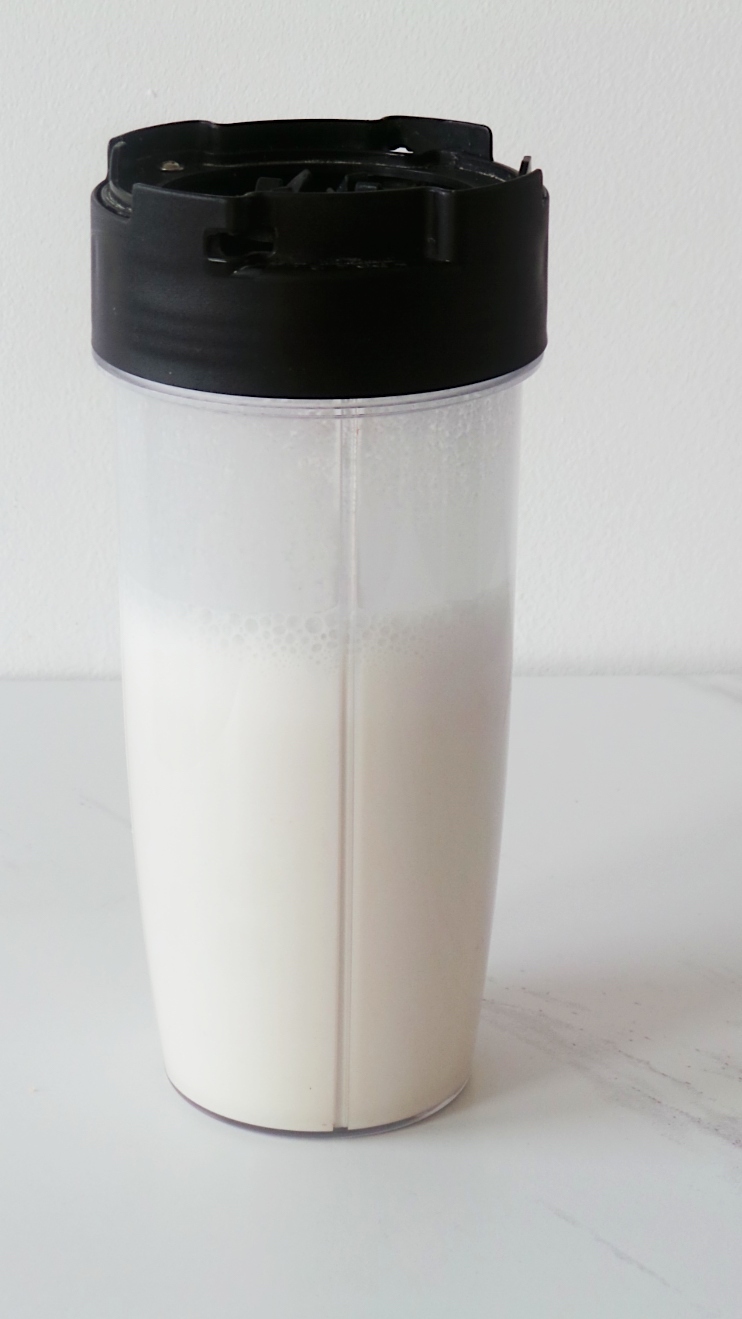 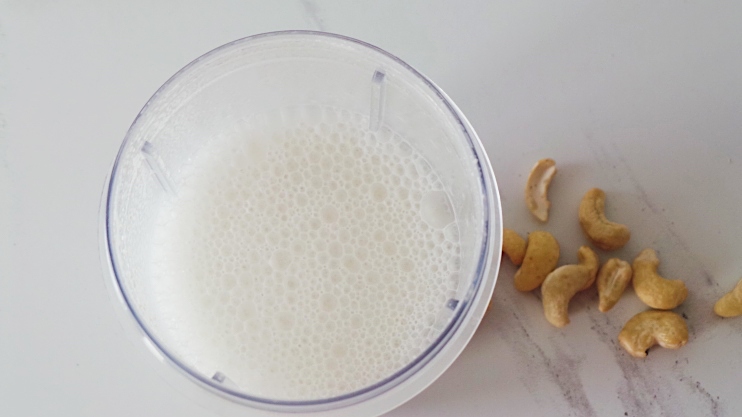 Now some people say, cashew milk needs no straining. This made me choke a few times. I don’t have the best blender, in fact, I bought the cheapest blender I found last year, because spending a small fortune on a blender to me is no bueno.

Mine works pretty well, but there were still cashew pieces in there that went in the wrong throat. So now, I just strain it.

You build a very stable device made out of: a deep bowl, a mesh strainer that fits and a cheesecloth, a nut milk bag or the muslin diaper piece I talked about. 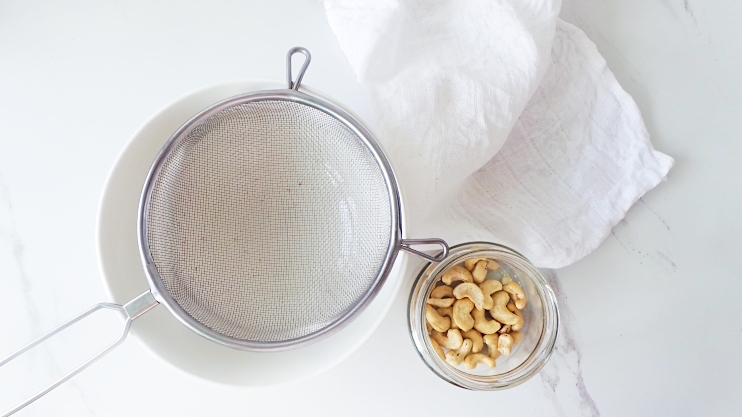 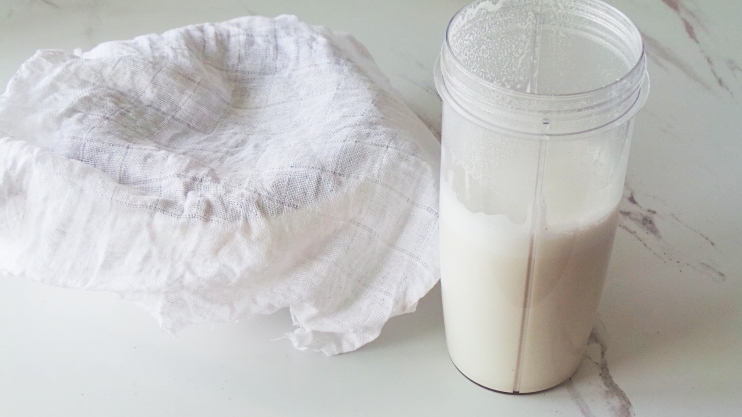 Then you start pouring the cashew milk.

Now, in the beginning, it will pour and rain like it’s November and I’m having a birthday. That bowl will start filling up. 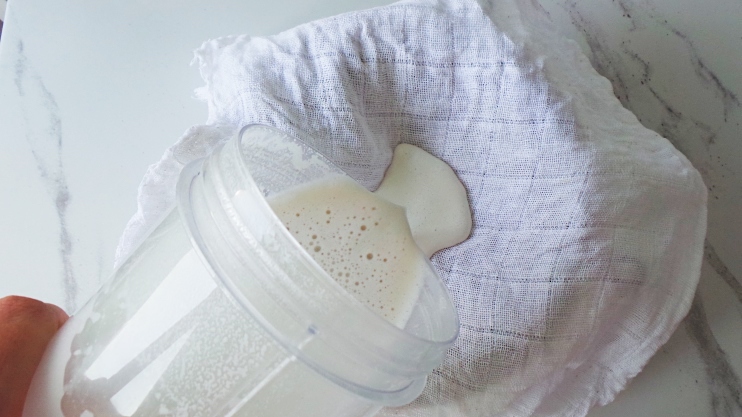 But then, things are going to get a little bit clogged up. So you have the glorious task of moving the pulp around with a spoon until all the “milk” goes down. 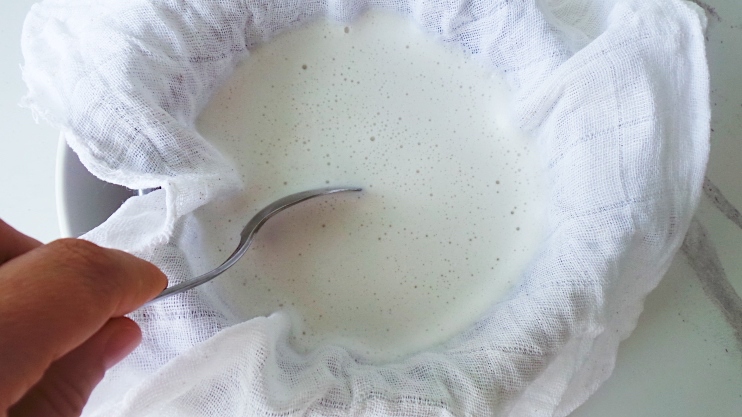 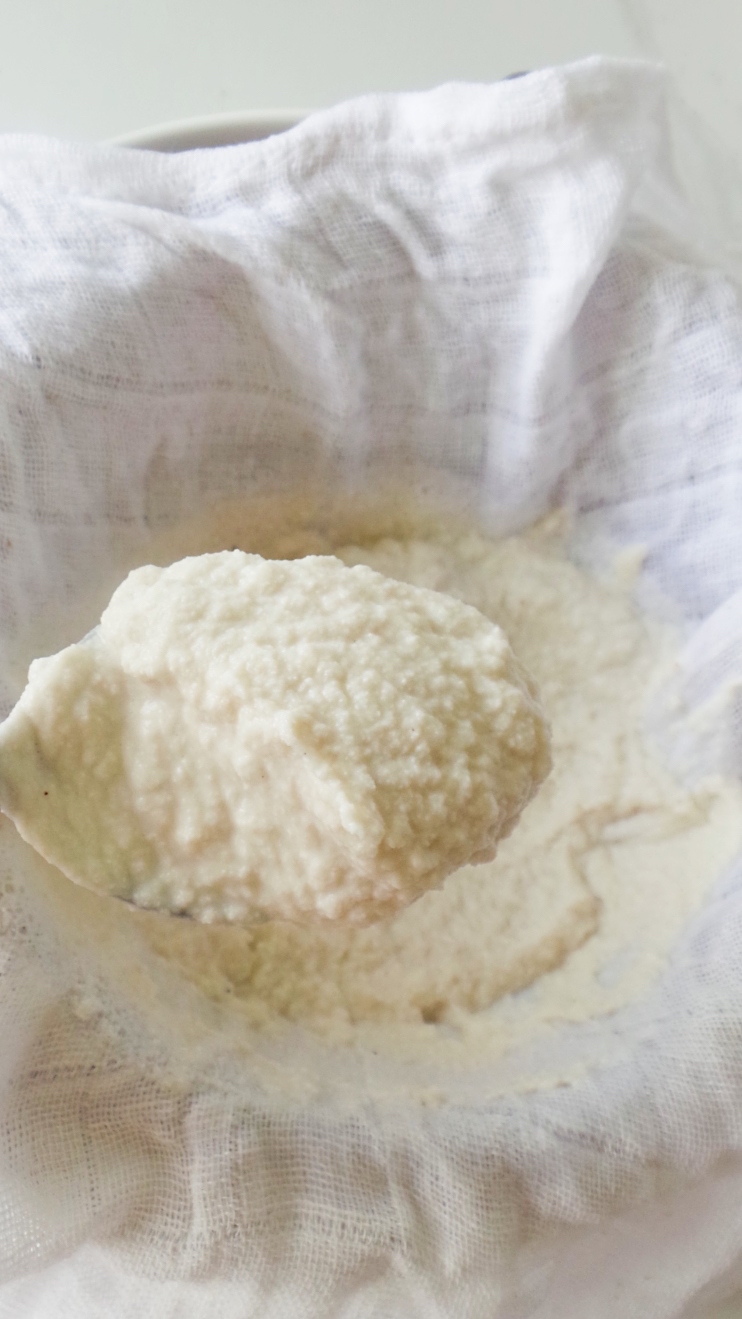 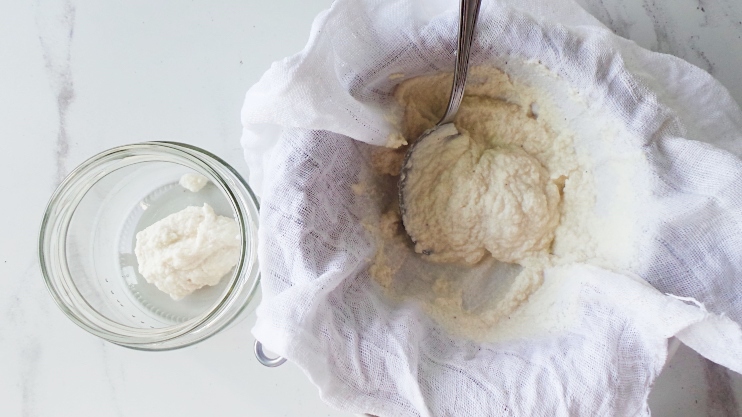 Then you remove the pulp and do it again until all the milk went through.

Then you take the pulp and put it in a jar you recycled, place that jar under your pillow and make a wish.

In one week you will come here and leave a comment, whether that wish came true, so I can try this myself.

I usually skip that step and just put the pulp jar in the fridge to make something with it. I have definitely NOT let it go to waste and let it get moldy, so I can disgust myself later.

Do you also feel like this step is taking waaaay too long? Let’s get to the next one.

But how do we do that? What device can we use? I made a fun little quiz that is also kinda an IQ test. 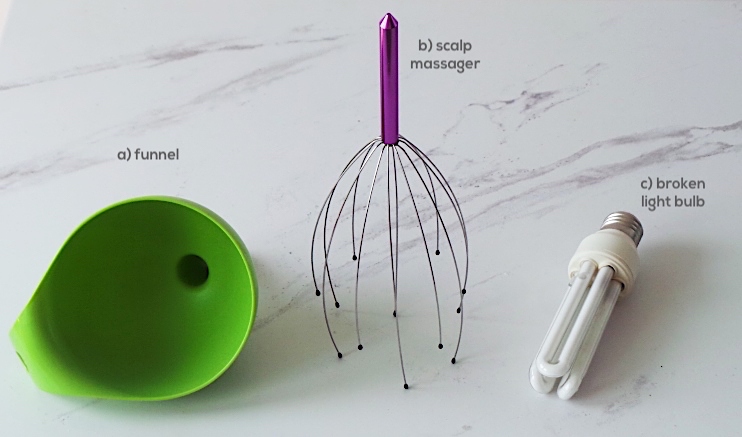 Tam Tam Tam. It’s the funnel. Okay, I totally spoiled it if you can read that fast. 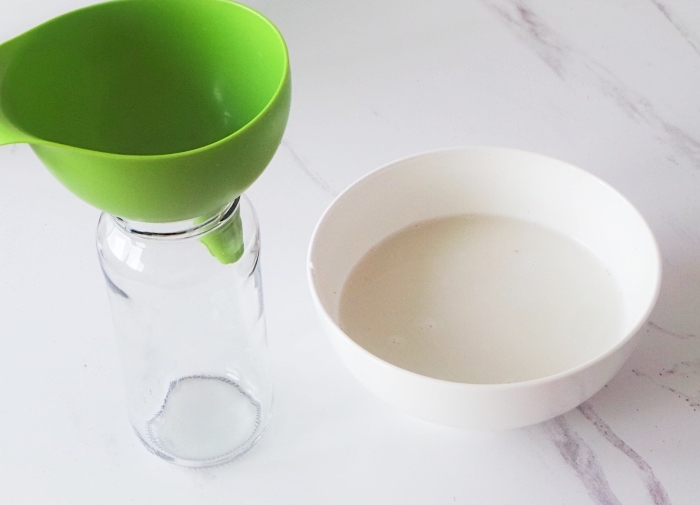 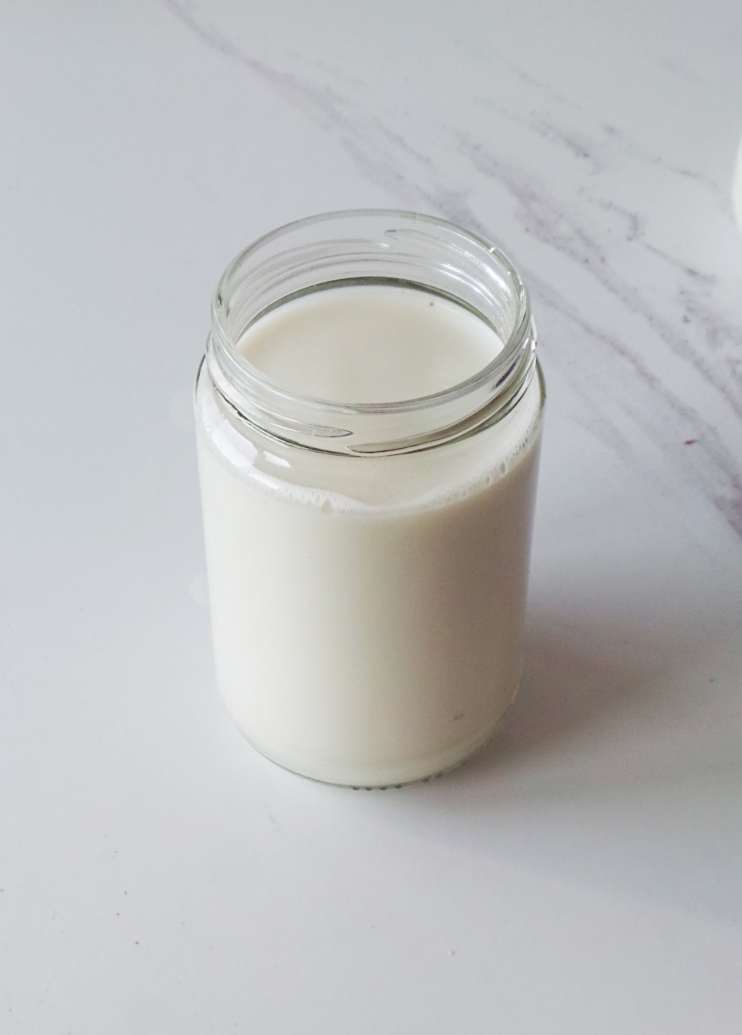 But as you can see – I used a gorgeous green plastic funnel I bought at IKEA 42 years ago and I’m really hoping I don’t get cyanide poisoning because of the green color and the plastic. But I’m fine for now.

Sometimes I feel like a monkey when I get so super creative with kitchen utensils. You know how monkeys always use sticks and stones to open nuts or bananas? No? Maybe I’m confusing them with squirrels. They do climb trees and look exactly alike.

What To Do With The Cashew Milk? 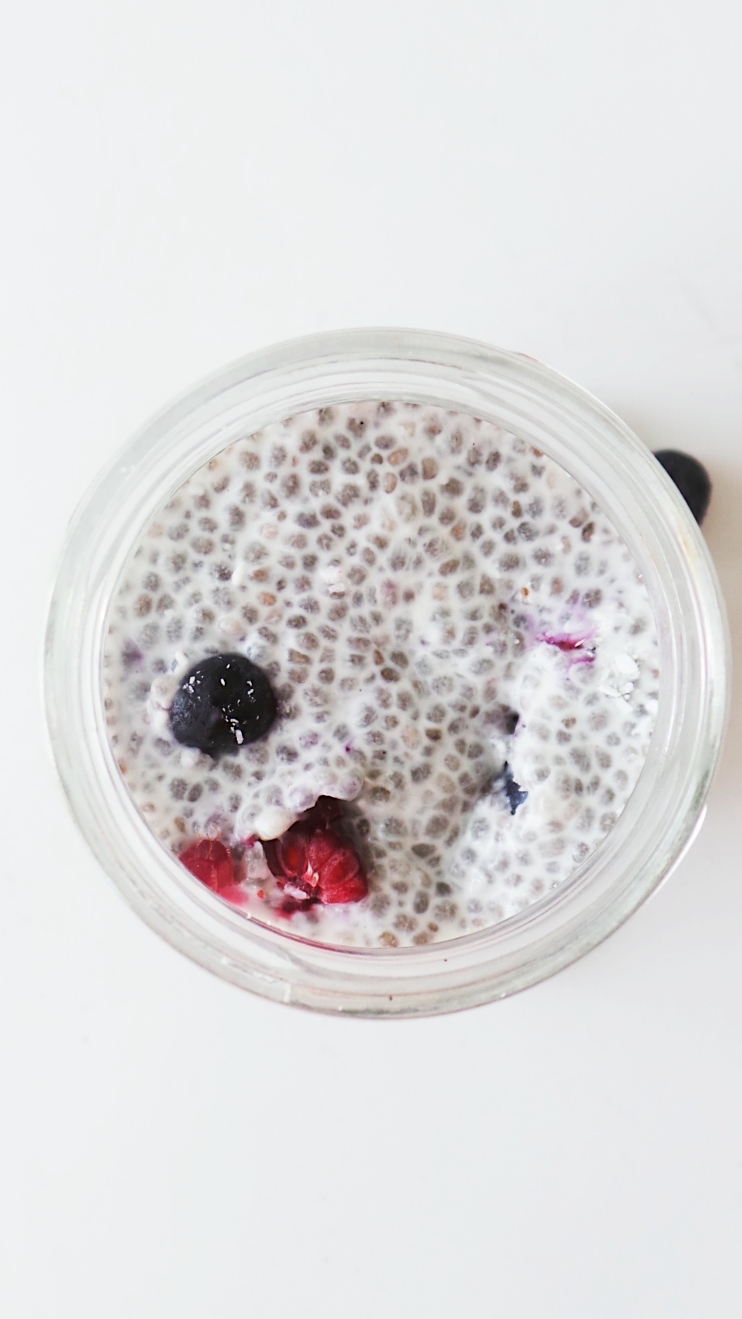 Honestly, I don’t have many suggestions. I don’t eat granola or drink milk, so I’m pretty clueless. But I tried cashew milk in coffee (decaf, because headaches), it was good, but definitely different than regular milk.

I really loved it in my chia pudding and I’m updating the pictures for that recipe right after I finish this one.

Other than that I can imagine using it in overnight oats, oatmeal, in savory dishes like pasta or in sauces. Like for example if you make a tahini sauce you can add cashew milk instead of water to make it even creamier.

What To Do With The Pulp 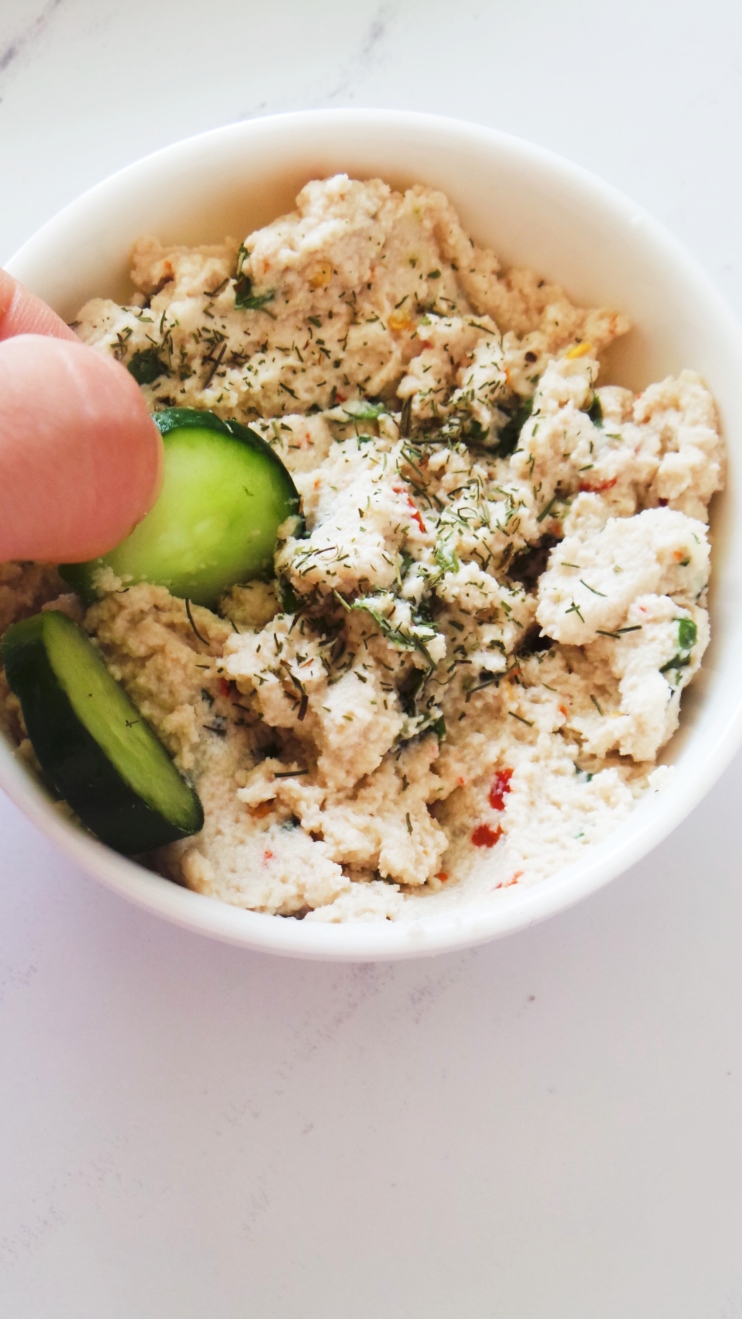 So after you’ve finished the ritual of putting the pulp under your pillow and making a wish, you can use it in recipes. I used this pulp to make a paleo tuna salad and a paleo vegan cream cheese with a lot of garlic in it. I will be sharing these recipes in the next few days.

You can also use the pulp in sweet things like muffins, pancakes or in smoothies. Whatever you like, whatever you decide, I support you 190%.

I hope you guys are having a good start to September, mine is kinda slow and nostalgic (as it always is once August is over). I haven’t prepared a clean eating challenge for this month, because I’ll be spending a lot of time traveling these next few weeks and I’m not in that place right now. So I’ll be sharing some recipes during the next 2 weeks and then we’ll figure it out.

I hope you enjoyed this post, share it with your friends if you liked it and if you have never made nut milk in your life – try this recipe! I promise just the process of making this yourself will make you so happy and proud and pretty. But maybe it’s just me. 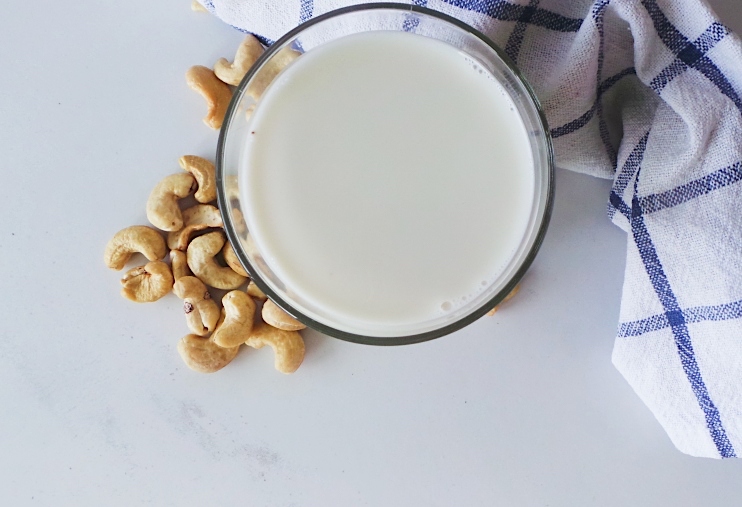 Share:
« My Playlist For Running & Why I Started Running
15-Minute Garlic Chicken With Black Beans »