I bet we’ve all made this one excuse at some point of our lives: “Eating healthy is too expensive”.

I know I have. And sometimes when I see that a bag of spinach costs as much as my shirt I still say that.

But is it really?

Is eating healthy that expensive?

Well compared to eating junk food all the time this is true.

At least in calories.

Meaning, if your only goal is to get your 2000 kcal a day, then yes eating healthy might be more expensive than eating processed foods.

Well, let’s stop speculating here and just witness a battle we’ve never ever thought we would see: Cabbage vs French fries. Both of them can be eaten as a side, but could also make a big difference in your health and your overall nutrient intake. 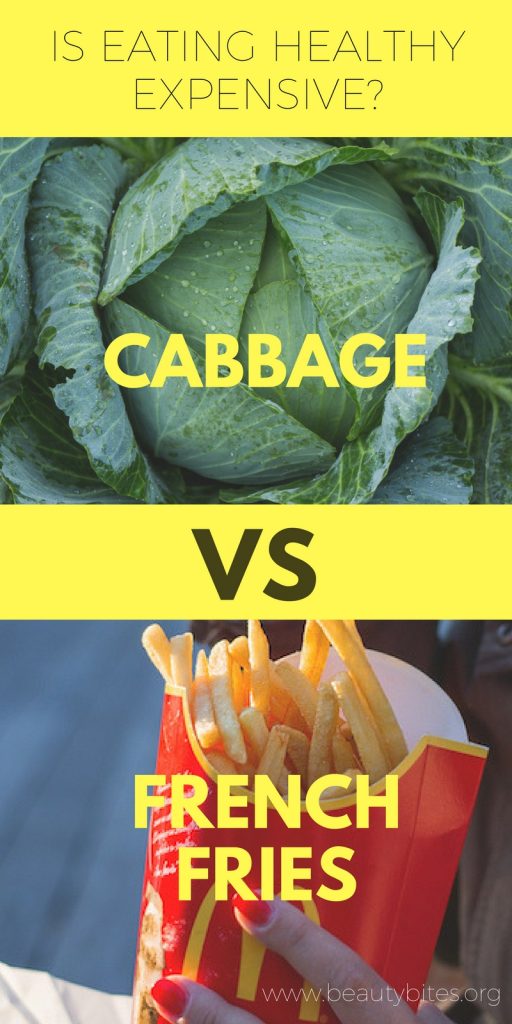 How Much Does a Calorie Cost: French Fries vs. Cabbage?

Now assuming you need 2000 kcal per day, you’d be good with around 12$ per day, eating only French fries. That would mean you can eat 8 servings of French fries and cover your daily calorie intake.

Now let’s take a look at cabbage, that angel in disguise of cabbagy-smell.

Well according to this source one cup of shredded cabbage (that’s about one serving) is around the same weight as a small portion of McDonald’s French fries, but has just 18 kcal.

And according to this site right now one pound of organic cabbage costs 1.18$. If we go with non-organic it would be even cheaper.

Note: of course prices of cabbage vary all over the world and depending on season, but since that’s the only online source for prices I found right now, let’s go with it.

Which means you pay 0.010$ per cabbage calorie.

Like, who am I the daughter of Rockefeller? Who can afford that?

Fun Facts from this calculation:

How Much does vitamin C Cost: French fries Vs. Cabbage?

Now you’re convinced. You can eat 8 servings of French fries, but unless you’re a determined masochist you probably won’t make it to 100 servings of cabbage a day. French fries it is!

Not, so quick! Because if you consider how long you want to live, how you want to feel and look, whether or not you want to lose weight, you know all those things nobody cares about – you might change your mind.

Because if we consider how much you pay per nutrient, say vitamin C, which is an essential nutrient we need for muscles, bones, hair, skin and all those little non-important luxuries in life, we get this:

Fun facts from this calculation:

How many nutrients do you get for 1$: French fries vs. Cabbage?

Well with one dollar you can buy around 0.84 pound of cabbage right now, which equals approximately 380g and 5.4 cups of shredded cabbage.

So not only do we get more food in weight for 1$ (that’s more than 7x more cabbage than French fries), we also get on average around 3-4x more nutrients from cabbage (even after excluding vitamin C, 47x more in cabbage ).

What you don’t see in this table

As a bonus from a normal serving of cabbage you get cancer-fighting and detoxifying nutrients called glucosinolates. These chemicals are not even on this list as they are not considered essential. They’re just a little bonus. But a bonus that can save your life.

From French fries on the other hand you get a full load of acrylamide and advanced glycation endproducts (AGE’s). Now those are just some fancy names for evil. Both of these structures are not beneficial for your well-being (to say the least). Acrylamide might cause cancer and AGE’s increase inflammation, accumulate during aging and are involved in the development & worsening of diabetes.

So to summarize it: French fries get you the potentially carcinogenic toxin acrylamide and inflammatory AGE’s, while with cabbage you get cancer-fighting glucosinolates. I’m not really a fan of that quote “Every time you eat or drink you’re either feeding a disease or fighting it”, but it seems to be very true in this case. Make the right choice.

Now all of the above doesn’t mean you should only eat cabbage (or French fries). That would be drastic and more importantly…insane!

It’s just to show you, that eating healthy does not have to be expensive. And it could in fact be cheaper. Because while nobody would ever eat 5.4 cups of cabbage a day (and you shouldn’t), most of us would eat a small serving of French fries any time and would even forget about eating those fries in a few hours. If you just stick to the one cup of cabbage – you’ll spend 0.18$ or 7.7 times less than for an ignorable mini serving of French fries (1.39$).

Also by introducing some cabbage into your daily diet you’ll get more essential nutrients without spending too much money. And without eating too many calories.  Which means – you stay in shape, save money and get some incredible health benefits.

This example should also show you that eating healthier doesn’t need to be drastic – take it one step at a time by eating vegetables as a side instead of fries. Of course mixing things up and changing your whole diet would be great, but if you’re not ready for that yet – start small, it will all get better from there.

I hope I didn’t ruin fries for everyone. Ok, who am I kidding, I do hope that.