We’re talking about the five habits that helped me stop overeating and what causes many of us to overeat in the first place. 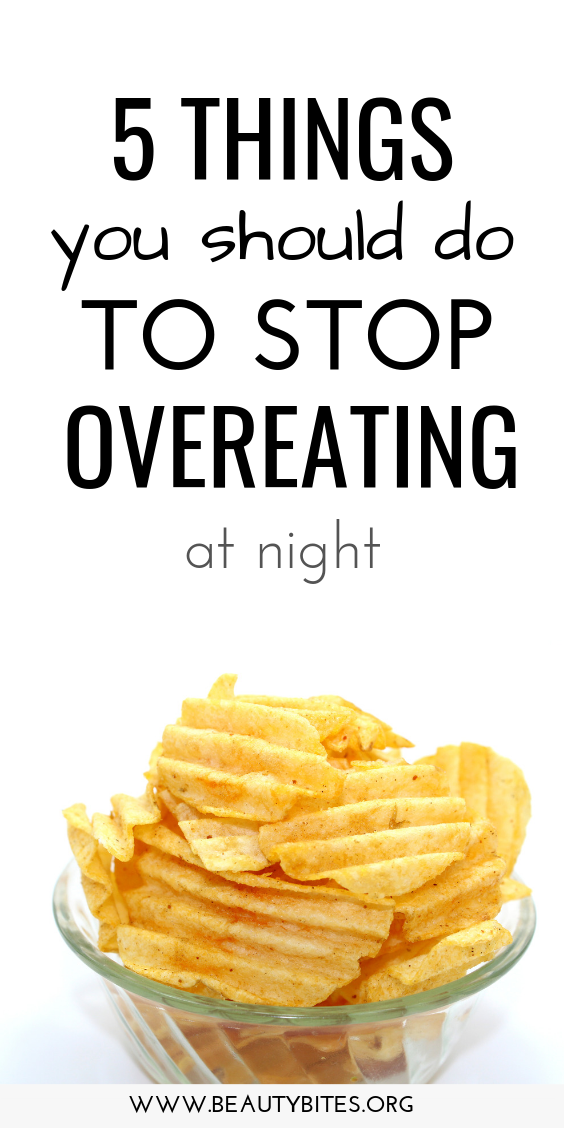 Let’s address the overeater in the room.

At every event, every all you can eat, and as uncomfortable as it is for me to admit – recently even at night when I’ve been on my own.

Last months had been tough, you might have noticed – I wasn’t posting a lot of recipes and basically just workout and getting in shape stuff.

Let’s just say I’ve had easier things to deal with in my life.

But I knew, this too will pass.

Quicker if I took some action.

And this little thought is what kept me going every single day and I now know, at the end of the day – everything will be alright.

Wow, that was kinda depressing to write.

But I didn’t write it to gain sympathy points, I did it to make a point.

Because during those hard times, the only thing that felt good was food.

Like, I always loved food, but this time food became my escape.

It became the best part of my day.

The part I would look forward to.

I would go to bed eating something and thinking about what I’ll eat tomorrow. At lunch, I would think about my next food move, what’s for dinner or afternoon snack.

Like, I wouldn’t see a point to even go out with my friend if I didn’t get a pizza.

So many names to make you feel like something’s wrong with you.

Like it’s not perfectly normal to not have it together all the time.

Giving in to those cravings felt so wrong.

Every day I would say: Tomorrow I will start new (with all the shit that was going on), but then would wake up and within 2-3 hours looking for some junk.

Now, mind you, I know that eating too much is bad.

I know that sugar is bad.

And I was very aware of it while I was eating cake late in the evening.

But it’s a state where all that knowledge just doesn’t matter. Like the consequences seem small. Seem unreal.

After all, do I know for sure I will get diabetes if I overeat every night?

And everyone has diabetes anyway. Besides, stress also makes you sick.

So a little food here and there won’t be the one to blame.

Just because you know something is bad for you, doesn’t make you not do it.

I don’t think people who cheat on their spouses forget they’re married.

And I don’t think people who smoke ever forget that cigarettes cause cancer and a million other diseases. After all they put it on the package for us to look at.

But people do those things anyway.

What Are The Causes For Overeating?

See, sometimes we do eat to “reward” ourselves. But, for a full reward to happen we need to want and to like the food we eat.

And that’s the problem with overeating. That’s what causes it.

You eat a certain food, something sweet for example and you really like it the first time.

Then this expectation: “Ooooh, this food made me feel happy last time”, makes you want it. Makes you crave it more.

But once you have it again, it’s not as good as you expected. You’ve build it up so much in your mind, that reality leaves you kinda disappointed.

So you need more of it to get the same satisfaction.

Add to this that you tell yourself:

“This is the last time I’m gonna eat this ever, tomorrow I’m going on a diet”

Then you end up eating 3 bags of chips and a whole cake.

It’s not a matter of liking a certain food anymore, it’s about saying goodbye to a dear friend who you like and trying to make the most out of the time you have left together.

I remember a few years ago I ate a fish burger at one tiny place and it just blew my mind.

It was spicy, fresh and super satisfying.

This burger was everything I ever wanted and more in food.

I went there endless times, but it was never the same.

See, I expected to like this fish burger, so I wanted it. But with each time it would get just okay.

I didn’t actually like it, but I remembered I did. So I wanted it.

And because it wasn’t what I expected, I needed something more after I ate it. To get the same feeling. So I’d go for brownies, cheesecake, whatever was near and seemed delicious.

So when it comes to overeating, it’s not the food you want, it’s the memory you have created around it. And that memory, unfortunately, is not real. It’s in the past.

And as you probably know once the past is in the past – things are never the same. It’s like meeting with people from high school 10 years after graduation. It’s fun, but it’s just not the same.

Right now, even though my situation is not the most stable yet, I stopped overeating. Not when I’m tired, not when I’m bored, not even when it’s late at night and I feel like I deserve a treat.

I started loving that feeling of lightness and of simply doing the right thing again. That’s my reward now. This feeling. It took some time, but it’s definitely

Here are a few steps that helped me and I want to share them.

But first: Please consult with a doctor if you have, or think you have a condition. These tips have helped me, but they shouldn’t substitute medical advice.

How To Stop Overeating

5 very simple habits that will help 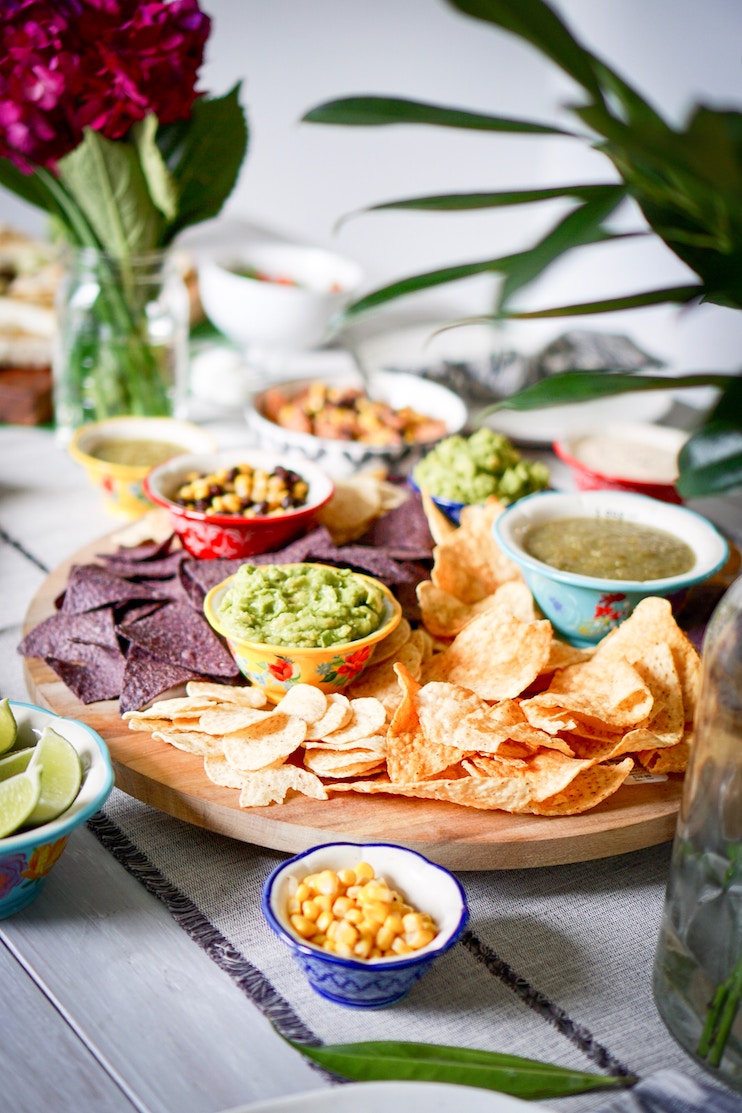 My biggest struggle was to not eat all the time. I sit at a desk most of the time and I have a lot of snacks around me. You eat a cookie here, you eat some chocolate there – it adds up.

One day I noticed that I haven’t felt hungry for a LONG time. Months. Eating had nothing to do with appetite anymore. It was about a habit of: “I want it, it’s there and I will have it”.

Sometimes even the “I want it” part was missing.

So I decided to let myself feel hungry before I reach for food. And I would drink water instead.

I realized 2 things: 1. it takes me at least 3 hours to feel hungry and 2. I’m obviously dehydrating myself without even knowing.

Now, once I did this long enough an interesting thing happened. I stopped wanting food so often, was more aware of what I’m eating and I started craving that feeling of lightness. And water.

I started eating only when I’m hungry, whatever I wanted, but only when I was hungry.

Now, this is not to say: don’t eat anything and only eat an apple a day. But spread those meals throughout the day, so you can really be mindful with them. So when you make a choice, you’re clear: Okay, this is good for me, I want this and I will eat it.

Quit eating at a certain time.

Because most of my overeating was happening at night, when I had no discipline whatsoever, I decided I wanted to stop eating at 6 pm.

If I couldn’t do it completely, I tried to eat just a little bit and not go to bed soon after.

This I think was the biggest change for me.

In the morning I didn’t feel full and like I needed to eat more to make it go away (yes, it sounds stupid, but that’s what I’d do).

The other thing I said I would do was to eat more raw foods.

Now, nuts might make you kinda addicted if you roast them, but raw? Not really. There’s something about raw food that just doesn’t make you addicted.

Supposedly, when you eat more nutrients, you stop craving the bad stuff as much. I don’t know if that’s true, but eating more raw foods and eating enough, did help me as well with controlling my eating behavior.

Another thing was to find, or better, create happiness in other areas in life other than eating.

Small things. As I said, I had a very tough time.

I needed things that activate the same brain pathways as food was.

See, when you’re busy doing something that you know will make you happy – you don’t need food that much.

So distract yourself. Make it a point to find something you actually enjoy doing instead of eating! You can go to Creativebug, they have a ton of online classes for painting, knitting, drawing – pretty much everything creative you can make with your hands. You can check out the classes here.

Related: 67 Productive Things To Do When Bored Instead Of Overeating

Actually, allow yourself to eat what you want

Now with all being said…eating the foods I actually like, after I drank water and after I waited 3 hours to feel kinda hungry, made me want to eat less. If I want to have pizza for lunch, I won’t make myself eat soup. Or some fake pizza.

I would eat an actual pizza.

But because I now also like being lighter, I am less likely to overeat.

If I don’t have the pizza, it’s going to take over my brain like it’s the only thing in the world.

So I allow myself to have what I want, enjoy it and move on with my life. And surprisingly this way I don’t need that much pizza. A slice or two is good enough.

This way I found out that I also ACTUALLY want salads, smoothies and all that healthy stuff. 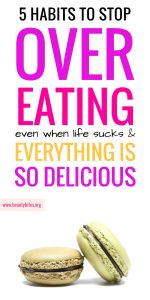 Share:
« How to achieve the goals you want and not the ones you think you should
5 Types Of Posts To Explode Your Blog Traffic »