Today is a good day because it’s cheesecake day. And lucky for you (and me) this easy low-carb cheesecake is perfect if you have a sweet tooth, but don’t want all the extra sugar and unhealthy-ness of a regular cheesecake. 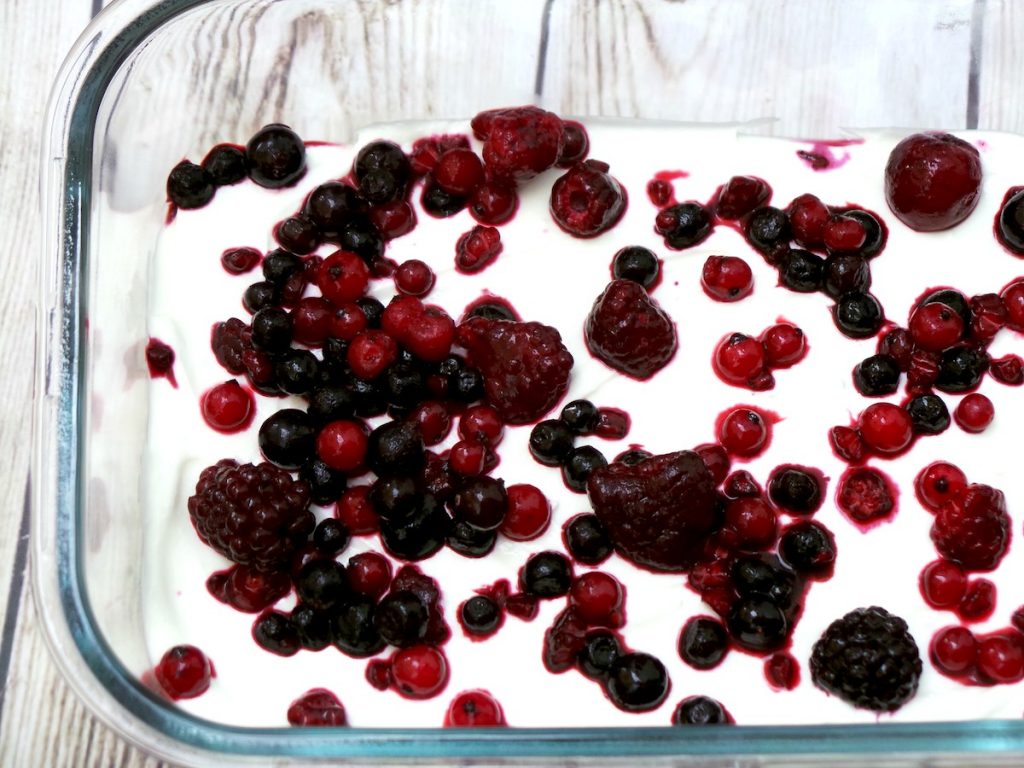 To make this no bake high-protein low-carb cheesecake you’ll need: 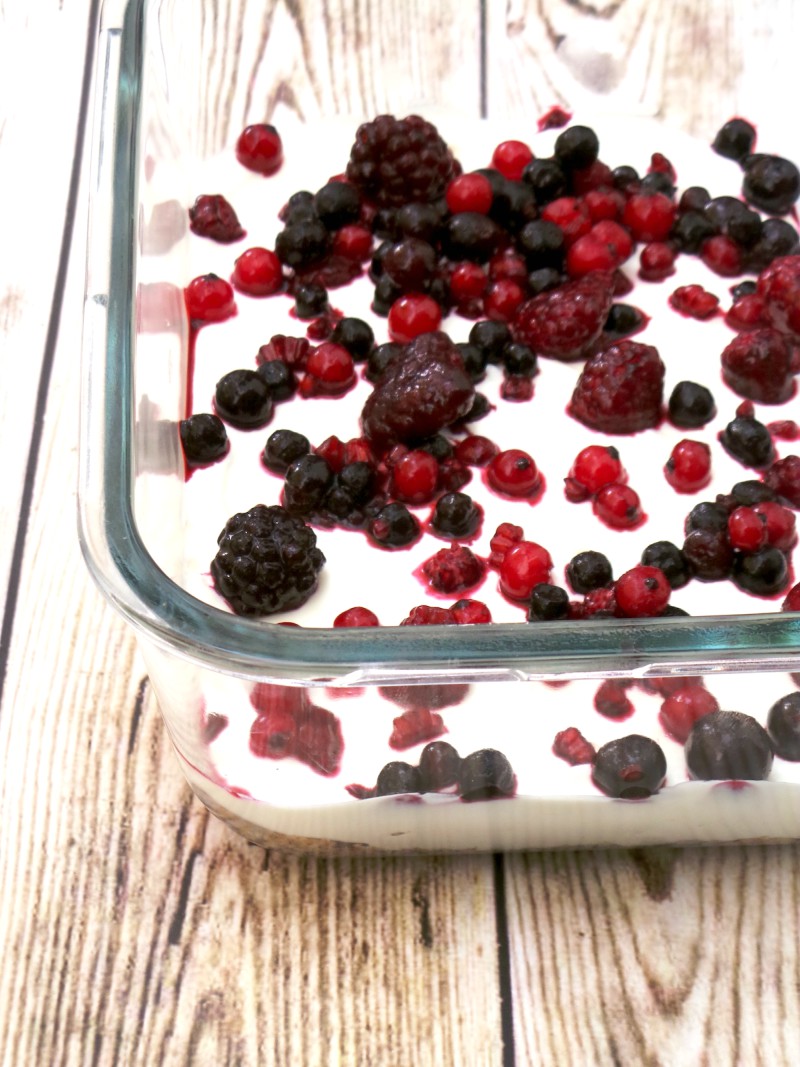 This is the cheesecake I made for my sister almost every week during her pregnancy.

After she found out she had gestational diabetes she was devastated because now she really had to stop eating panna cotta from the store every night.

Unfortunately, it turned out it wasn’t just panna cotta she needed to stop eating. It was also almost everything I knew to be healthy.

True there are plants that are high-protein, low-carb & vegan, but if you’re not careful you might be getting too many carbs.

First, it was bananas, then it was oatmeal, then potatoes.

But the most surprising to me was lentils.

LENTILS!!!!! What a naughty, guilty pleasure. I repeat: Lentils. 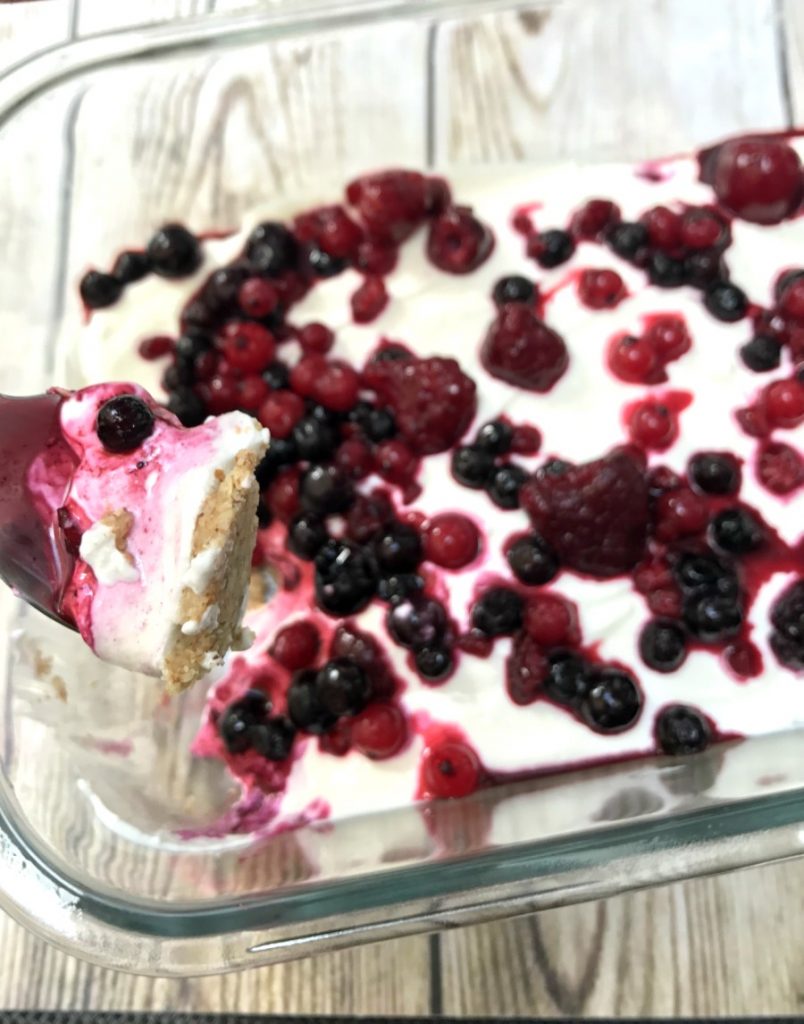 The only things that wouldn’t raise her blood sugar were eggs, meat and cheese. And nuts, berries and vegetables.

Now, we had no problem coming up with recipes for healthy lunches and low-carb dinners.

But she loves sweet stuff. And she was pregnant. And I didn’t want to deny a pregnant woman something that can make her happier.

So we started making this cheesecake.

I had made a similar healthier cheesecake before.

But now that we were making it so often, we had to simplify the recipe even more. And use even less carbs.

And so the no bake low-carb cheesecake was born. That was also high-protein. Score. 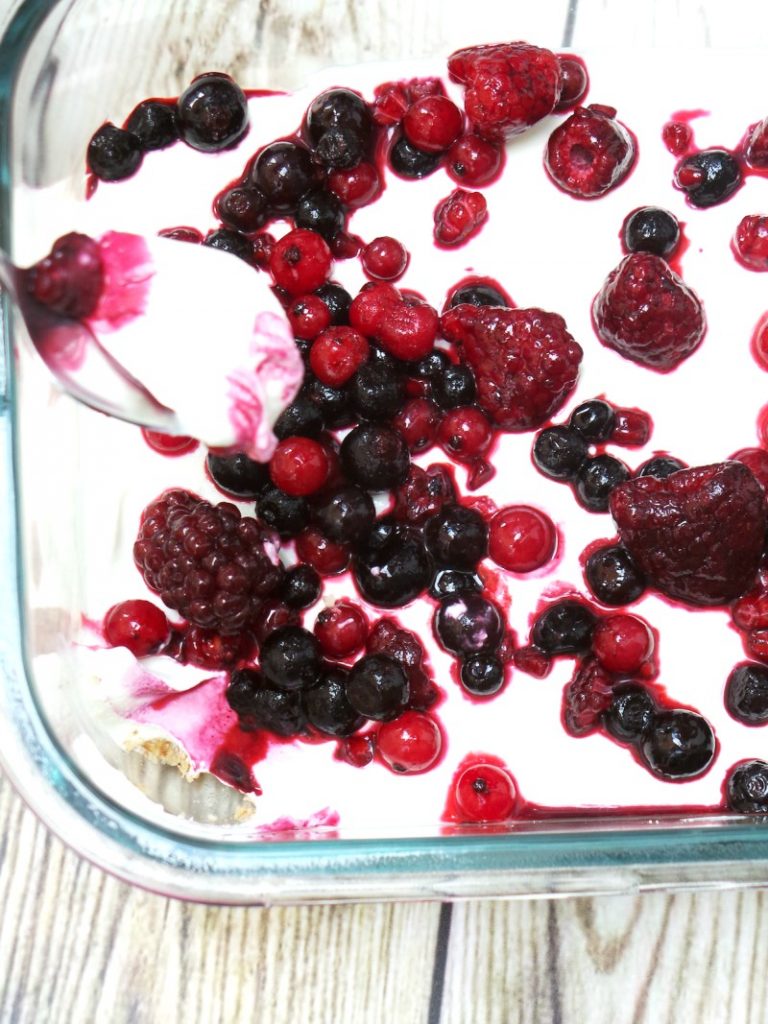 Now, we did use some oats here, but to make it even more low-carb-y we would simply leave the oats out.

And if you’re very lazy – you just skip the crust. Chop some walnuts and almonds on top and you’re ready.

With this version you basically blend/food process the ingredients for each layer separately and then layer them one after another in a glass container, so that they look cheesecake-ish. 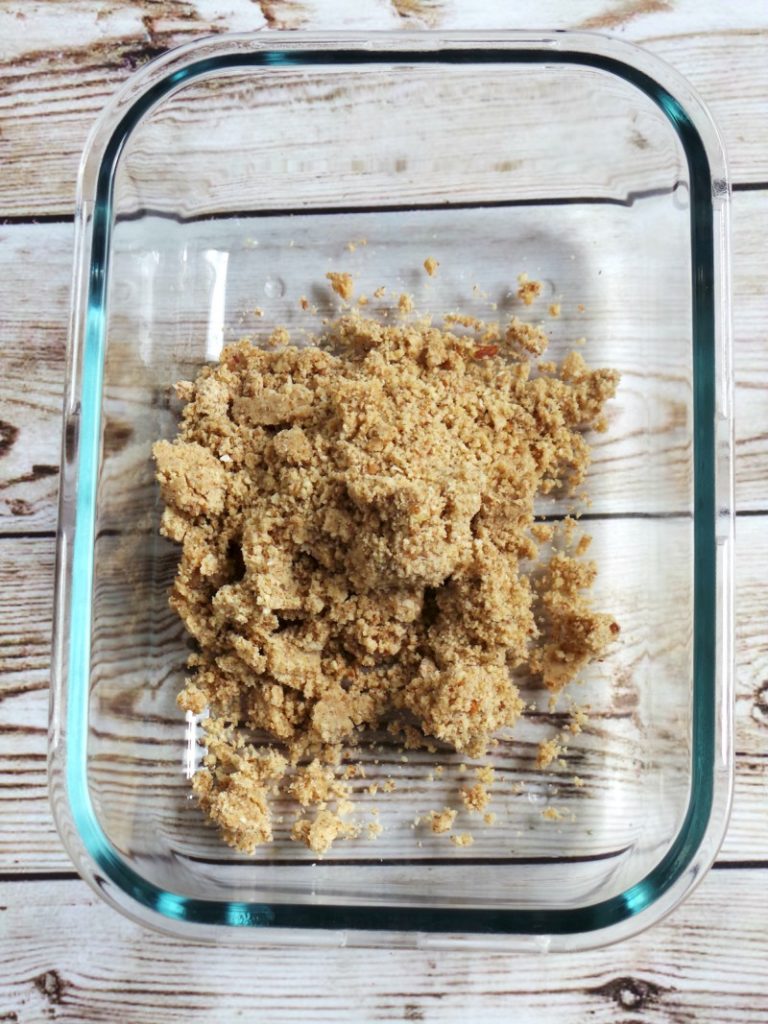 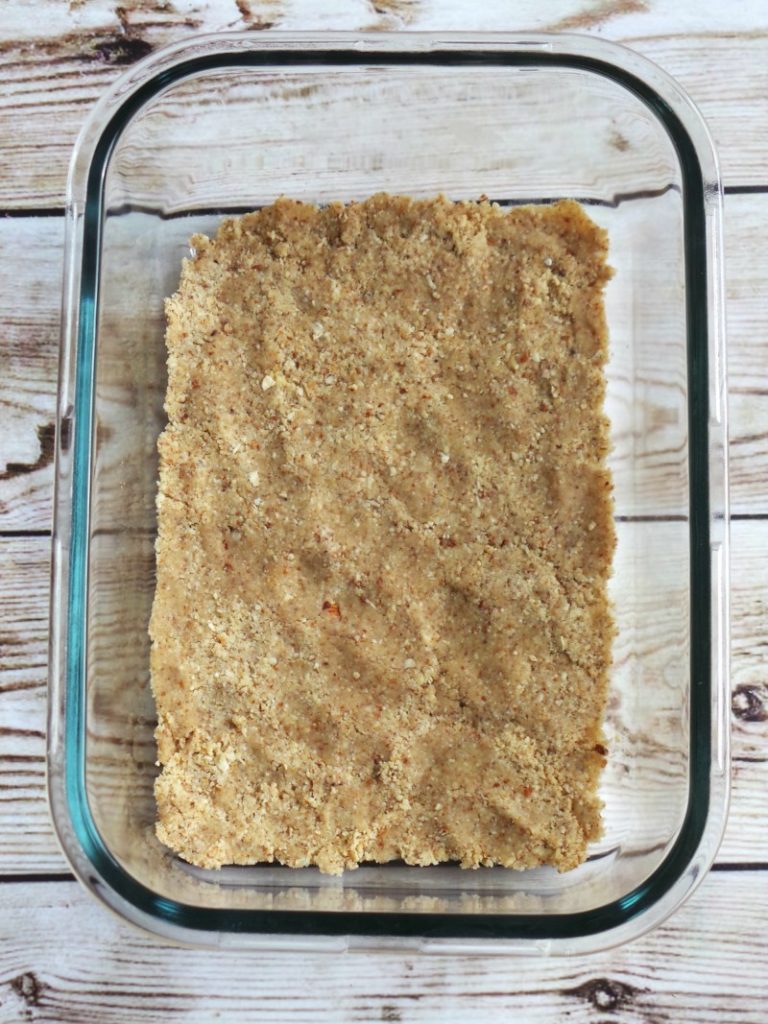 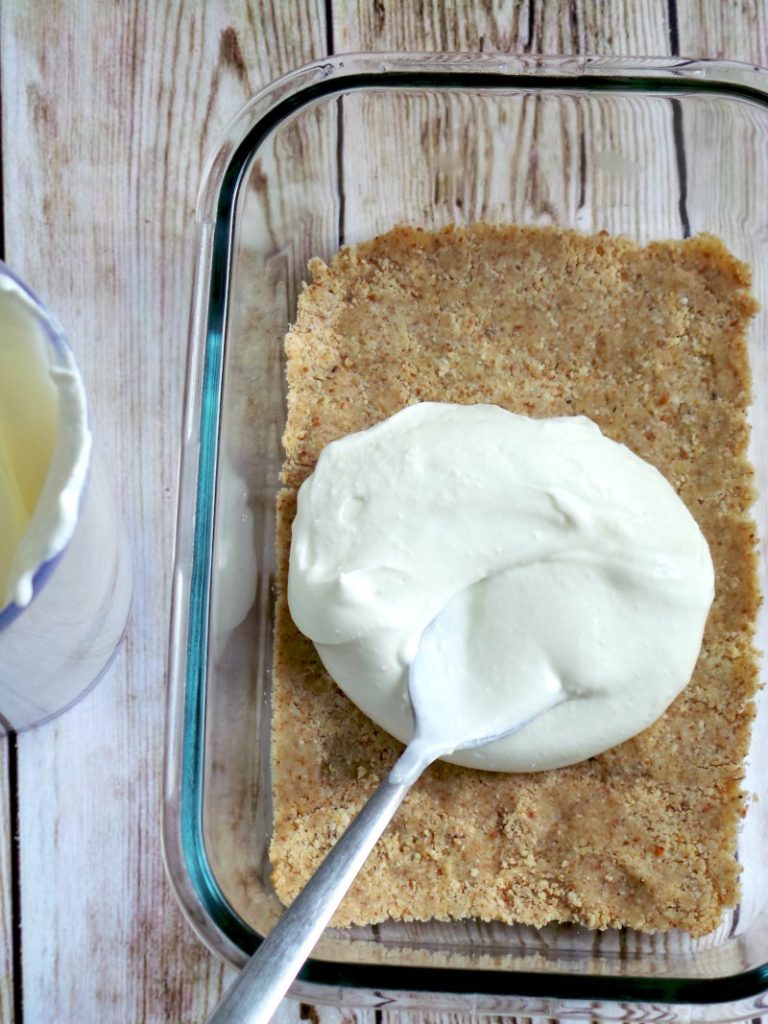 After all the sweaty blending and layering, you put the cheesecake in the fridge or freezer.

An hour or so after, you take it out, eat and enjoy life, even if you need to lose 10 pounds until next month or have gestational diabetes.

No regrets and no worries.

Look, it’s beautiful. And it’s so, so easy and delicious. 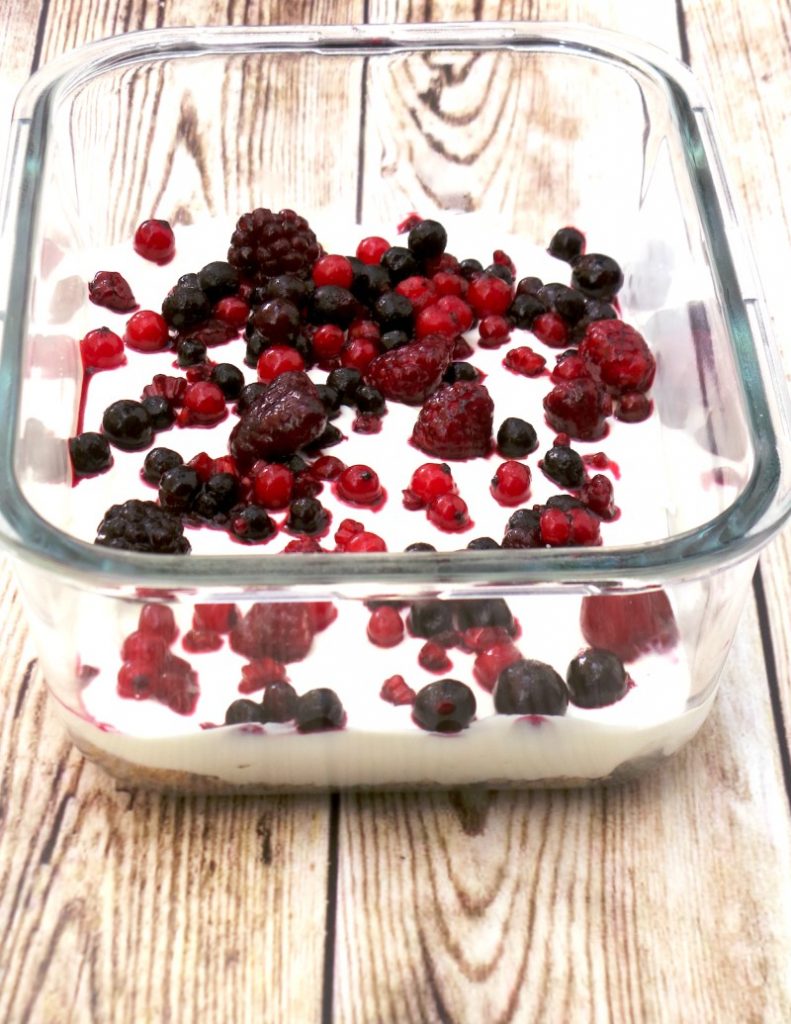 In the end everyone is good, baby and mom are fine and we’re all still eating this beautiful and tasty cheesecake from time to time.

It’s super easy to make and even if you don’t have any health or fitness goals – it will make you happier. 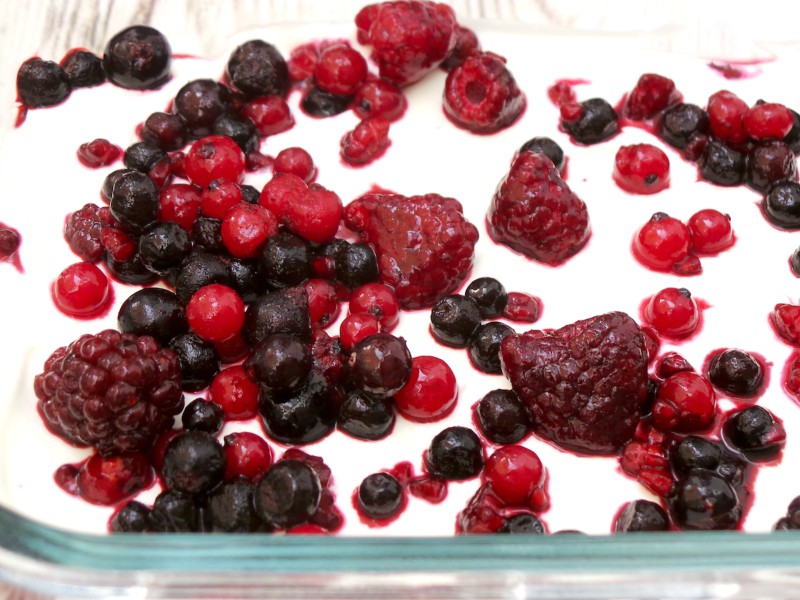 I made this no bake cheesecake in a big glass container, but if you want to meal prep it: split into small jars / smaller containers for more convenience. Then refrigerate or even better: freeze (if using after 2 days).

In my experience, this recipe makes 4 servings (I’m trying to tame my sweet tooth), but depending on the size of your jars it can vary.

You can also switch layers. My sister sometimes does nuts+oats, then filling, then berries, then filling again and berries again. Tastes like heaven to me either way, so do what you like more.

Also, I know there are many different stevia options. I’m not an expert and this is the only recipe I used stevia in, I always did it to taste.

* I used 1 tsp of stevia, but I found there are types where this might be too much/too little. The recipe I made with honey I used 2 Tbsp honey, which is around 3Tbsp sugar. You can either convert to the stevia brand you'll be using, or taste.

For a more low carb version of the crust - use 1 tbsp ground flaxseed instead of the oats, or add more almonds & nuts leaving the oats out.

If you don't need the recipe to be low-carb, you can also use 2 tbsp honey.

calculated with 2 tbsp honey, not stevia

Alright, guys, I hope you enjoyed this recipe – let me know how it goes and don’t hesitate to ask if you have any questions!

Share:
« 10 Superfoods To Eat Daily If You Have Diabetes
Lose weight with a desk job: 5 weight loss tips when you’re sitting ALL DAY LONG »