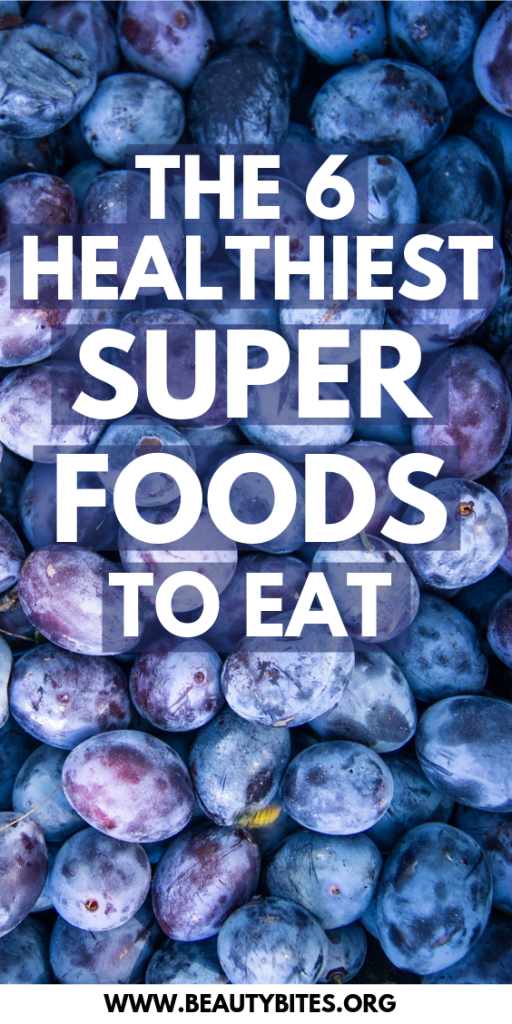 I created this mini superfood list, because I wanted to highlight the incredible health benefits of some regular “underdog” foods that aren’t usually called super.

Also, I kinda want to make kale, spirulina, and matcha ugly cry. It might seem like a cruel intention, but those egocentric suckers deserve it. They got too cool and now they need to be excluded from every single “good” food list out there.

This will give them time to take a hard look at themselves and understand that being rich and famous is not the most important thing in life. But let’s first start with what superfoods actually are. 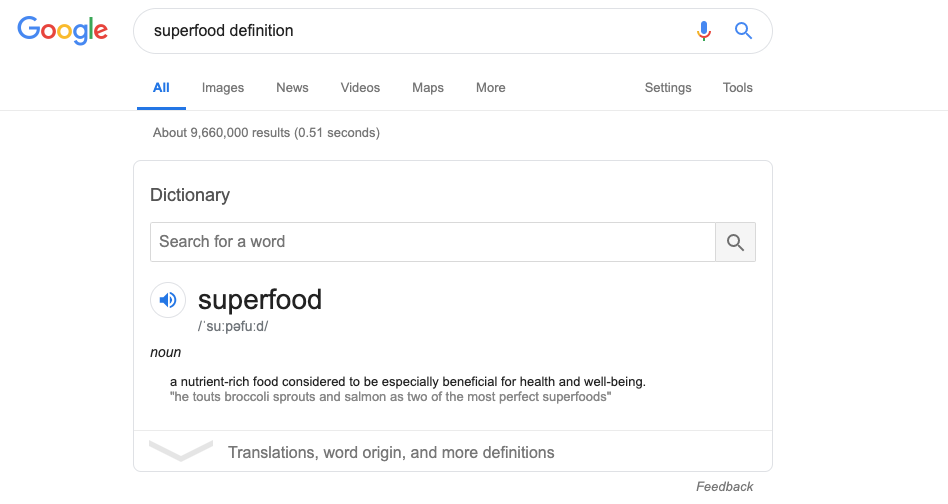 It took Google 0.51 seconds to deliver this genius result. I don’t think I own a dictionary that has the word superfood in it, so we’ll just go with that. See, superfood is food with health benefits. Shocking.

I always thought superfoods were foods with the letter S on their chest that fight crime and save babies, but I guess you live and you learn.

My own belief is that one food isn’t better than the other. Actually, I know for fact, foods are actually better for you when they’re together (source). Here’s what I mean: eating cooked tomatoes with avocado improves the absorption of the carotenoids found in tomatoes. Carotenoids are the chemicals in tomatoes that protect your body from free radicals and disease – you want them. And you can get more of those beneficial chemicals when you eat tomatoes with avocado, than if you just eat more tomatoes.

Even if I don’t believe one food is better than the other, the following are 6 super healthy foods I found out about through much research. They’re common foods, but nobody talks about them. I believe anybody can afford these foods, they usually don’t come in powdered form and my grandma had actually heard about them.

Nowadays, peaches are mostly known for their ability to look like a butt. It’s a thing. However, peaches can do more than look like a part of the Kardashian family.

But, peaches aren’t any less. They contain anthocyanins and chlorogenic acid, which are strong antioxidants.

Peaches also might help prevent breast cancer in post-menopausal women and some sorts have anti-bacterial skills.

My bet is peaches just didn’t get the right manager, thus didn’t get as famous for their abilities. Sometimes I wonder whether blueberries slept their way to the top to become this popular. I guess we’ll never know.

Something else I found is that peaches existed on this planet longer than humans (research). This is super exciting, because it means peaches actually are food we were eating before we knew how to domesticate, package and genetically manipulate everything. It means peaches are a food our genes evolved with. This is huge.

Personally, I was reminded of the existence of actual peaches last year, when I made this super delicious smoothie and I highly *highly* encourage you to start eating peaches when they’re in season (NOW). I even suggest chopping them up and freezing them for rainy days.

Rosemary is a herb that gets pushed around like it makes no difference in the world. Like it has no purpose. It’s all basil, basil, basil, basil. We get it, basil is more delicious than watermelon, can you stop? Rosemary, however, has sleeves and keeps things and tricks in them.

Rosemary has a unique set of phytochemicals like caffeic acid, carnosic acid, chlorogenic acid and rosmanol. These tiny molecules are responsible for the incredible health benefits that come with regular rosemary consumption. (source)

For example, it has been demonstrated that rosemary has positive effects on asthma, atherosclerosis, blood pressure, blood sugar, and mental health.

Rosemary is shown to protect the liver and the kidneys, to have antioxidant, anti-inflammatory, anti-viral and anti-bacterial properties as well as to relieve physical and mental fatigue. (source)

Adding rosemary to grilled meat can also help decrease the formation of the highly toxic heterocyclic amines that are formed during grilling, baking or frying (source).

Another food that got its thunder stolen by blueberries. Plums, just like peaches, have one of the highest antioxidant capacities among fruits.

For those who have diabetes, like my dad – you can also eat a plum or two. According to research they don’t spike your blood sugar and are actually good for you. (source)

Plums contain powerful antioxidants called anthocyanins (also found in blueberries) and come to this planet with major health benefits including:

The one benefit that really stands out in the case of plums is their positive effect on bone health, the effect is proven by many studies especially in postmenopausal women.

As for how many dried plums you need to eat to improve your bone health, a study suggests 2 servings, which is around a 100g of dried plums every day (source).

If you haven’t heard of purslane, it’s okay. It’s not a very popular food, it’s basically a weed that grows everywhere – in your garden, in the park, in the cracks on sidewalks. Remember, if you ever, EVERR, see this monster… resist the urge to:

What you can do instead is carefully collect the leaves and then use them in a salad, a smoothie or somewhere else. Your tongue won’t go numb from the 0 flavor purslane has, but you will get a lot of nutrients out of that succulent sucker.

Purslane is used as a folk medicine in many countries and is a great source of potassium, magnesium and calcium. It also contains more vitamin A and C than spinach.

From aaaall the green vegetables out there it has the highest content of omega-3’s, specifically alpha-linolenic acid aka ALA (source). As you know, it’s important that we get enough omega-3’s to combat chronic low-grade inflammation. Omega-3’s are also needed for proper growth and development in young children. Although the body can’t do much with ALAs, some studies show that getting more of this omega-3 fatty acid can improve the omega-6/omega-3 ratio in the body.

The health-benefiting properties of purslane include:

How to use purslane? Well, it’s mainly used in Mediterranean countries and added to soups and salads. That is also how I usually would use it – add it to a dish after cooking, add some to salads – see how you feel.

Stinging nettle might be the last thing on your mind when you think about food, but this pain-inducing weed has a long list of health-promoting nutrients.

Stinging nettle is a great source of antioxidants, protein, vitamin A & C, magnesium, potassium and iron. The combination of vitamin C and iron in nettle is very beneficial for building hemoglobin and treating anemia – something nettle is used for in many countries around the world.

Interestingly, one study showed that the intake of an infusion with nettle for 12 days also improved the vitamin B12 levels in women. (source)

Crazy, since B12 is a vitamin almost exclusively found in animal products. This vitamin is also not readily absorbed in the body, so if you have lower vitamin B12 levels – drinking nettle tea might help!

Oh, and you won’t sting your insides when you eat nettle. Once nettle’s cooked, the stinging stops.

In many countries around the world, stinging nettle is used to treat diabetes, atherosclerosis and cardiovascular disease. (source)

Stinging nettle is also shown to have anti-inflammatory properties – demonstrated in its ability to relieve arthritis and allergic rhinitis.

Now, the ancient method for treating arthritis with stinging nettle is a little masochistic. Instead of eating the nettle, people would flail the arthritic limbs in order to stimulate circulation and to bring warmth to the joints.

My favorite way to eat nettles, is also the only way I know how to prepare them – in a soup with rice or bulgur, or as a rice dish. I tried to make a nettle smoothie once and I’ve got to say, I think I stung my insides a little bit there. However, I do sometimes add just a few leaves to my smoothies – it gives a very fresh taste and it doesn’t sting once the nettles are fully blended.

Another option is to drink nettle tea – just like the women in the B12 study – you’ll still get the benefits.

Arugula aka rocket salad is quite unique. It’s kinda like those X-Men mutants with their mutant superpowers.

On the one hand, arugula is a green leafy vegetable, which we all know we need to eat a ton of.

Well, arugula has one of those molecules as well – it’s called Erucin and it’s demonstrated some impressive anti-inflammatory (source), detoxifying and anti-cancer properties in different studies (source).

Rocket salad is a great source of magnesium, potassium, vitamins A, C, K, folate, carotenoids and polyphenols. It also comes with a quite nice omega-3/omega-6 ratio (important for keeping chronic inflammation away. (source) 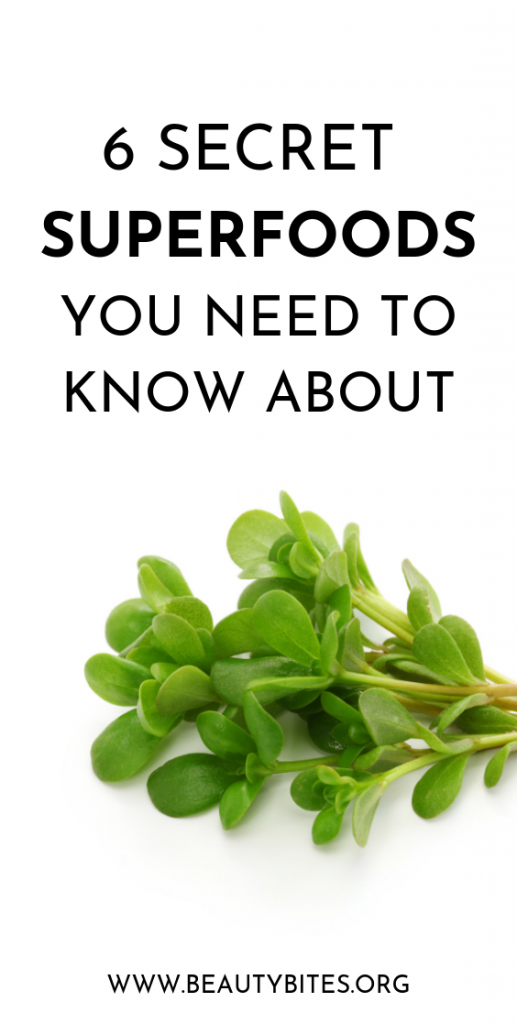 Well, I hope you enjoy some peaches and plums this summer, remember this is a list of just a few foods and it’s in the mix.